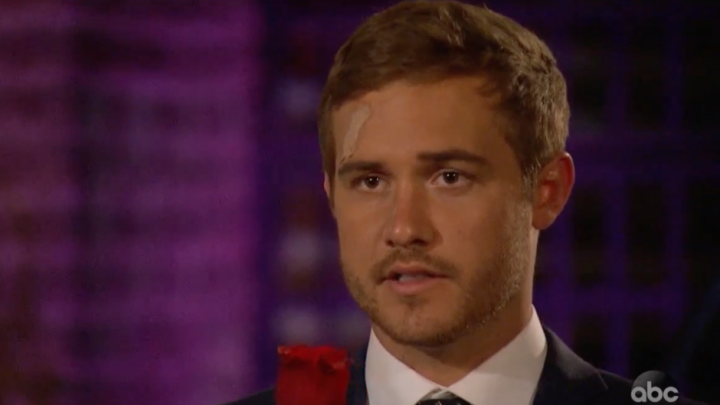 Y’all, what a week. Not just in Bachelor world, but in my own lol. I had a bit of a stomach issue on Monday that left me so fatigued I couldn’t even finish watching Monday’s episode of The Bachelor live – although, it appears I didn’t miss much. Then we had a snow day (which I used to finish my decluttering challenge) and then work yesterday ended up being hectic as well. So basically, I’m just now catching up even though Twitter has done an amazing job at keeping me informed. Oh well – let’s do this thing.

Not much to say about the rose ceremony – that went about as planned. The last of the irrelevants left and Peter finally realized keeping Alayah wasn’t worth it. Hallelujah!

Sydney’s cute, but why do I feel like she has zero emotions? She just seems really boring to me.

Also, shout out to the Twitter detectives that did a great job at exposing her sob story as completely made up. Home girl definitely went to homecomings and had friends.

If I were in this house, I probably would have slapped the emotions straight out of Kelsey by now, this girl needs to get a grip – she is twenty freaking eight years old!!!

My thoughts on Kelley – this girl is mature. I think she’s open enough to want to enjoy the opportunity and see where it goes, but she’s not desperate and she’s keeping a realistic head on her shoulders about this whole thing. Just because she’s not as desperate as the other girls and letting herself fall head-over-heels too fast doesn’t mean she’s not genuinely into him, but Kelley is the strong, independent queen we need to keep ourselves sane this season!!!

How is Peter not annoyed with how clingy Kelsey is? She’s so smothering and insecure and her entire existence screams RED FLAG.

“Hopefully tonight will be smooth sailing” said no one on The Bachelor ever, except Kelsey and her deranged ass.

This is probably the stupidest fight I have ever heard and Tammy has seriously dug herself a massive hole with this one. We’re gonna have a good time watching her in Paradise, aren’t we? Like, she’s so concerned about being sent home over this but she’s the one bringing up irrelevant drama and personal annoyances that are nowhere near important enough to bring up to Peter other than selfish reasons? Hunny, what did you really expect to happen?

There is nothing to do but face palm during this entire rose ceremony. This is just straight up painful to watch. Like, did they go to a freaking day care to find the girls for this season or… ???

Peter. How are you choosing Tammy over our unproblematic queen Lexi. I do not understand men, at all…

The only good part about this episode: Chris Harrison grilling Peter during the credits for being the clumsiest Bachelor.

Onto the second episode and holy freakin’ cow, where the heck did Victoria F’s backbone come from???

Honestly hard to tell if Hannah Ann is sincere or just saving her booty. There is just no understanding the girls this season… I don’t trust any of them.

Chris Harrison is honestly the only person I like this season.

Okay wait… him sending Victoria P home is a shocker. Of all the girls here that I feel like he doesn’t have actual connections with, he’s sending her home before them?? I’m just really confused.

Victoria’s body language and words are basically one giant “yeah f*** you.”

Peter should honestly just send all the rest of the girls home, we all know he’s only into Madison.

Tammy is literally just here to start the most irrelevant fights and I’m gonna deck her, I swear. How has she even made it this far?

PETER AND MADISON JUST WALK STRAIGHT OFF WHEN THEY HEAR THE YELLING OMG.

Damn Peter really can’t catch a break, can he? Not that I’m Victoria F’s biggest fan in the first place but man, my heart just breaks for him.

My head already hurts going into this 2-on-1.

Tammy just takes any minor inconvenience with any of the girls and blows it up into such a big, unnecessary deal. WHO IS SHE AND WHO BROUGHT HER HERE ?!

Like Mykenna has been obnoxious but I’ve never doubted her feelings for Peter – is that just me, or…?

I’m just confused why Natasha keeps getting roses, I feel like she never does anything? And that she’s staying over Sydney and Mykenna? Mostly Sydney though – that one’s just shocking.

Also, this is now my new favorite meme.

I’m just not even gonna comment on next week’s episode. I just don’t even have words for this season anymore. Until next week – and maybe I’ll watch it live for once so I can have wine in my system at the same time to make it more bearable.