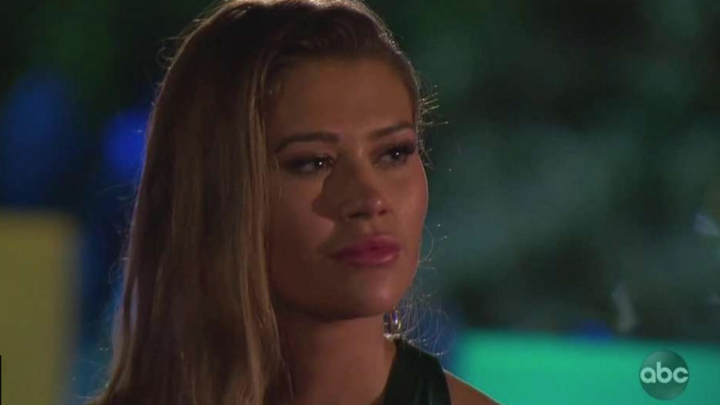 Hello readers! I know this post is a little late, I ended up going to the OU basketball game last night so I didn’t get a chance to watch last night’s episode until this morning! And naturally, trying to watch an hour and a half long episode turns into a 3 hour ordeal when you’re trying to watch at work. But alas, here is my live blog of the latest drama! I have to say, this one was full of it!

Wow, Chris Harrison calling Hannah Caelynn off the bat? Yikes. This episode is off to a wonderful start! (((((:

Again, I don’t know the full story of what really happened between the beauty queens but I still feel like Caelynn if a wolf in sheep’s clothing. “I’ve moved past it,” probably because you’re cold hearted and were the one doing most of the backstabbing? It’s just how she carries herself. I can’t explain it.

Again, Demi needs to sToOoP emphasizing Colton’s virginity!!!! Every episode she just confirms she’s only here to steal a V-card.

Let’s be real, I don’t think I could go through with this bungy jump date y’all. But Tayshia is very cute and sweet. I’m not sure I see her making it to the end, but she’s a sweetheart.

My opinion on the girls complaining about Caelynn getting the one-on-one:

Courtney: “Are they FDA approved?”

Demi: “I have the sweetest blood ever” – um, or the most toxic blood? Seems more fitting.

I hope we start to see more Cassie. She’s still my favorite. She’s so sweet and non-dramatic.

I respect Courtney some for not wanting to be domineering or disrespect the other girls’ time, but she doesn’t do anything to stand out, she just sits there and complains.

Okay, and for once, Demi was being semi-nice and trying to encourage her and now Courtney wants to throw hands at Demi because… she dragged her own feet…?

Again I say, Demi is mistaking arrogance as “confidence” and it’s getting on my nerves.

Okay Courtney, pls. You really don’t have anyone but yourself to blame that you didn’t talk to him. You didn’t even try.

Nothing screams favoritism like “I’m going to give you a bunch of stuff to flash in front of all the other girls.”

While she may not be my favorite but I do have immense amount of respect for her sharing her story on national television.

Courtney: “it’s not a show” ???? Girl you are literally on THE BACHELOR, like…

I have no words for Demi… just wow. Demi is just so toxic and AWFUL, it hurts!

Oof. Until next week, my friends.

How I look when I’m trying to play it cool but on the inside I’m really just wondering when the heck I’m gonna finally get my life together 🤷🏼‍♀️ ⠀⠀⠀⠀⠀⠀⠀⠀⠀ Also, I didn’t know how to end this speech so I just said “boomer sooner” and no one did anything except for @mrsmcbirdiee and that’s why we’re besties.
BBY IS 21 🤪 I couldn’t ask for a sweeter friend to send me endless TikToks or be there for me in the good times + bad. Can’t wait to celebrate you later!!!! 😏
Alexa, play Pretty Little Thing by Too Close to Touch.
Honesty hour: I seriously have been SO scared to talk about diets on the blog. I’m so passionate about nutrition but I know that there’s so much science surrounding it that I was so hard on myself about accidentally leaving something out, saying something wrong, or seeming like I have ulterior motives. But the truth is that I know with all my heart that my desire is to see people be truly, happily healthy. So, I put fears aside and shared about a “diet” plan close to my heart because I’ve seen the wonders it’s worked in my own health journey. ⠀⠀⠀⠀⠀⠀⠀⠀⠀ The thing I love about the elimination diet is that the process starts the same for everyone but acknowledges our bodies’ genetic differences and works to reveal foods + ingredients that are causing adverse reactions in our bodies — things like acne, headaches, bloating, joint pain, anxiety/depression, trouble sleeping... a lot of times are because we have food intolerances + sensitivities we don’t know about. If this is something that resonates with you, I really do recommend you check out today’s post on thesouthernsooner.com! Start off your new year with a “diet” plan that is actually sustainable! ⠀⠀⠀⠀⠀⠀⠀⠀⠀ You can swipe to see my personal results from cutting out toxins + ingredients that weren’t serving my body and by balancing my nutrition. You can also shop my look through the @liketoknow.it shopping app 💕 http://liketk.it/2IGxF #liketkit #LTKfit #LTKunder50 #ltkunder100
shots, babieeee 😤
Home is where the heart is, and my heart resides in Texas 💛 Thanks for a restful two weeks spent with the people and places that are nearest + dearest to my heart. I’ll be back soon! But for now, back to reality ✌🏼
Advertisements
%d bloggers like this: